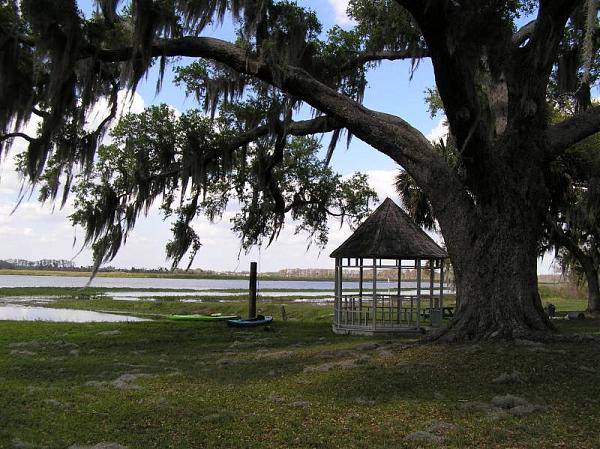 If you have some time, you need to take a trip out to Makinson Island.   I had the pleasure of spending some time out there recently and was just amazed at the surroundings.   The huge oak trees, picnic area, nice restrooms, walking trails, gazebo and even campsites.   This 132 acre island is located in Lake Tohopekaliga, pronounced “toe-hoe-pea-kah-lie-gah”, and you have to find your own way out there, but it’s worth the trip.

Some of the local history of the island includes Emathla, a 19th-century Seminole chief who made it his home, and his son Coacoochee, one of the great chiefs in Florida history and born on the island in 1807.   Its location at the mouth of Shingle Creek, which flows south from Orlando.  Dense growth protects the shoreline and there is a small dock and beach to put your boat.

Makinson Island was purchased by the state back in 1999 but wasn’t turned over to Osceola County until 2001, where is was opened up to the public.   At one time a lot of exotic animals were brought to the island, most were removed but there are still a few longhorn sheep, goats, hogs and wild deer left.  There is also plenty of  birds of all typed that have make this island home.

The family that the island was named after also owns a hardware store in downtown Kissimmee called Makinson Hardware, be sure to stop in and say hello to Elaine and John Makinson.