Fire Ants… What are they?

Fire Ants… What are they?

Let just jump right into it… Fire Ants are mainly in the South and South Eastern parts of America.  The came over on a cargo boat that landed in Alabama.  They stay in the warmer climate due to the fact that they can’t survive in the cold.

They have hardened exoskeletons, meaning that they have no bones, but a hard outer  layer for protection. They breathe through their trachea and their bodies have three major parts: head, thorax and abdomen.  They have three pairs of legs, and a pair of antennae on their head.

Fire Ants build big “mounds” from softer soil that can get up to 2 feet high and as wide as 3 feet.   They are not to picky where the make their home, like the bottom edge of a building, under steps, or even by the water.  As long as the weather is warm, and the soil is soft.    There is only a small hole in the top on the mound, like a volcano.   They have a tunnel system under it that can span out up to 25 feet away from the opening.  Almost like a subway under ground.  You could be walking over it and lot even realize it.   They can also build a new mound basically over night hundreds of feet away.  If there is a rain storm, they can float on the water until they find dry land to build again.

There is normally only one Queen in a colony.  The colony can be up to 200,00 worker ants, all sterile females and able to bite and sting.  There are very few males, only one is needed to keep the population.   The male and female ants that are not sterile, have wings and fly off the make new colonies.  The Queen can lay thousands of eggs, and the workers feed her and the larva.   The lifespan of Fire ant workers depend on their size.  Small workers may live 30 to 60 days, medium workers upto 90 days, large workers upto 3 months, and queens may live two to six years.

They are good for our ecosystem, experts believe that they turn the soil and redistribute nutrients.   They also help clean the ecosystems by consuming small dead or dying animals.   Just be careful, if you get to close or mess with the mound, the workers ants will come out biting to protect their queen, and it does hurt to be bit by a fire ant. 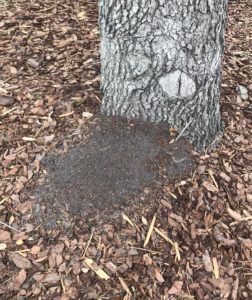 Fire Ant information and what they do!